Dr. Seuss' Highly Anticipated "What Pet Should I Get?" Hits Bookstores 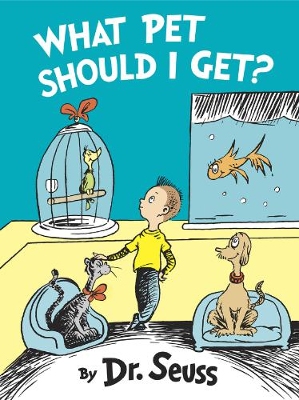 The children's book world is filled with excitement today as Dr. Seuss' unpublished manuscript, "What Pet Should I Get?" will finally grace shelves.

We all know "Green Eggs And Ham" and "Oh, The Places You'll Go" by Dr. Seuss. But this one is particularly special. An original manuscript with accompanying sketches by Dr. Seuss, aka Ted Geisel was discovered in the La Jolla, California home of the late beloved children's author.

Random House Children's Books announced back in February that they would release the book on July 28th, 2015.

A box filled with pages of text and sketches was found shortly after Ted's death in 1991 when his widow Audrey Geisel was remodeling her home. At that time it was set aside with other of Ted's materials. It was rediscovered in the fall of 2013 by Mrs. Geisel and Claudia Prescott—Ted Geisel's longtime secretary and friend—when they were cleaning out his office space. They reviewed the materials, finding the full text and illustrations for WHAT PET SHOULD I GET? among other work.

At least two more books will be published from the materials discovered, with titles and publication dates to be announced.

WHAT PET SHOULD I GET? captures the excitement of a classic childhood moment—choosing a pet—and features the brother and sister characters that Dr. Seuss introduced in One Fish Two Fish Red Fish Blue Fish.

"To be able to share this newly discovered Dr. Seuss book that was created during a most prolific period in his career marks a special moment in children's book publishing," says Marcus. "The millions and millions of children and adults who have learned to love reading because of Dr. Seuss can now look forward to adding this treasure to their beloved collections."

The discovered materials will be kept at UC San Diego, where the Dr. Seuss Collection is housed within the Geisel Library.

Previously, Random House released Dr. Seuss stories collected for book publication for the first time, which had appeared only in magazines: (Horton and the Kwuggerbug and More Lost Stories in 2014; and The Bippolo Seed and Other Lost Stories in 2011).

Lifestyle
Safety Tips To Protect Your Pet On 4th Of July

Film
Movie Review: "The End Of The Tour" Is A Heartfelt Tribute To A Literary Icon

Lifestyle
What Are The Wackiest Pet Names This Year?