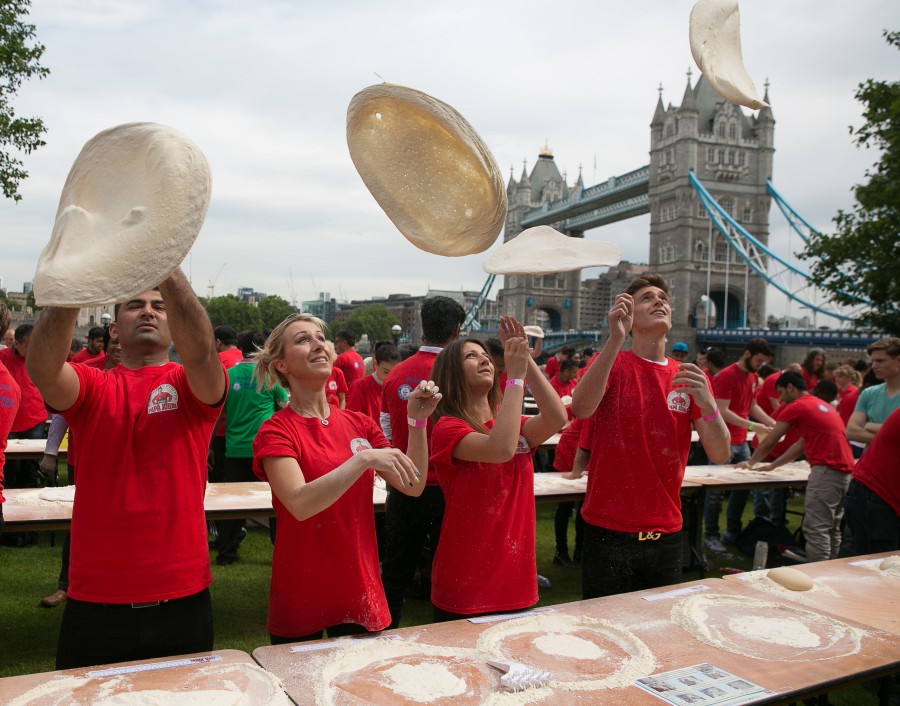 Central London was covered in flour and dough this week as Papa John's staff broke a GUINNESS WORLD RECORDS™ title to celebrate the launch of the pizza chain's 300th store in the UK.

Lead by Papa John's Founder and CEO, John Schnatter, an army of record-breakers descended on London's Potters Field Park, beside Tower Bridge, with the aim of setting a new GUINNESS WORLD RECORDS™ title for the most people tossing pizza dough simultaneously.

John Schnatter said: "Today has been a fantastic way to showcase the passion we have at Papa John's for pizza and to demonstrate how much skill goes into making pizzas. I am delighted that we have broken the record today - a great way to begin our 300th store opening celebrations in Wimbledon tomorrow."

"Our staff have worked incredibly hard today and it is testament to their dedication to the craft of pizza making that we have smashed the GUINNESS WORLD RECORDS™ today."

Strictly Come Dancing professional, Natalie Lowe, also took to the stage and played her part in achieving the record by motivating all of the participants with some Fit Steps and classic dance steps, such as Salsa and Jive.

Natalie, who signalled the start of the attempt said: "What a fantastic GUINNESS WORLD RECORDS title! I'm so excited to have played a part in getting everyone motivated and teaching some dance moves. It was a lot of fun."

Today's event kicked off at 8.00am this morning when Papa John's employees and volunteers began arriving to take up their spot for the record bid.