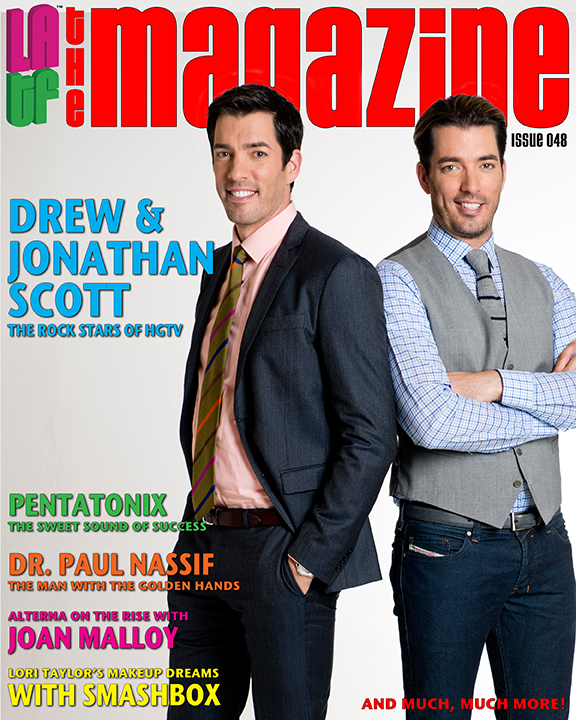 READ THE FULL COVER STORY INTERVIEW IN ISSUE 48 OF WWW.LATFTHEMAGAZINE.COM

I have always loved remodeling homes, knocking down walls and searching for new materials. When I bought my first home almost 20 years ago, I went to stone auctions, learned about marbles and granites, where it came from and so much more. It was all fascinating to me. What a thrill it was to give an old house a second chance and a brand new look.

About four years ago, I discovered HGTV and became obsessed with their programming. That, to me was the best reality TV; at least, I could learn something. At the same time, I started following “Property Brothers.” What a fantastic idea, to have a realtor and a contractor to guide us through the emotionally grueling process of buying and remodeling what will become your “castle.” To add to the appeal of the show, HGTV had chosen the most charismatic, good looking and charming twin brothers by the name of Drew, the realtor and Jonathan, the contractor. It took no time for the brothers to get straight to the heart of American women. Each season, their growing popularity made them more of a household name; the rock stars of HGTV. At a certain point, the brothers even made the list of People Magazine’s Sexiest Men Alive!

Of course being a fan myself, I decided that Drew and Jonathan should be on our next cover. We had tried to book an interview with them before, but these guys are so busy that we could not work it out. However, I had already done my research and was ready to go whenever the time came. And guess what? The time finally came. I quickly checked back on my notes to refresh my memory and tried to ask as many interesting questions as I could.

I knew that the twins were born in Vancouver, Canada. Drew is the youngest of the three brothers, J.D. Scott is the eldest and Jonathan is in the middle. Their Dad, Jim Scott was an actor and an assistant film director, their mother; Joanne Scott worked as a paralegal. Come to think of it, this family really likes names with the letter J.

It was a “no brainer” when Jonathan and Drew decided to become actor/producers. Quickly realizing that becoming a star may or may not happen, they decided to tackle the financial end of it and invested in their first property by age 18. They made a good profit and, with it, they formed Dividian Production Group in 2004. Their company has produced, directed and written various shorts, as well as events, while still acquiring and selling properties. Drew became a licensed realtor and Jonathan a licensed contractor, which brought them to be discovered by HGTV. Starring in “Property Brothers” since 2011, they help hundreds of people to attain their dream home. For Drew, it was heaven. The show would allow him to work with his two passions; real estate and TV production.

As the fifth season of the “Property Brothers” resumes and after months had passed since my last request, I finally had a chance to do the interview and find out the real story of the famous Scott brothers.

You’ve been renovating, buying and selling together for 15 years. Take us back to the beginning: how you both discovered your passion for properties and how it came together with HGTV.

JONATHAN: In the very beginning — we were actors as kids coming up through high school. We grew up on a ranch, so we were always handy with our dad and he taught us how to build. We built our first house at 14 years-old; building barns and everything. When we were coming out of high school, we didn’t want to be struggling actors, so we thought, “Let’s invest in real estate, that’s a smart move.” We bought every book we could on how to buy houses with no money down, and how to properly renovate. Eventually, at 18, we bought our very first house for only $250 down. We did the renovation and when we sold it, we made about a $50 grand profit. That was the ‘light bulb’ moment where it went on, and we thought… we could make a business out of it.

And you went for it  — you started your own company?

DREW: Jonathan and I didn’t start a company right away. We just started buying houses and renovating and selling them. So it was more of a hobby for the first few years while we did other stuff. I was in school for four years as well, studying kinesiology. Eventually, I went back to get licensed as an agent and Jonathan went back to school for construction and design. And that’s when we began — we set up a company and started working with clients.

So you had developed your passion at that point.

DREW: Yes, it’s a passion we’ve always had. Jonathan and I both were always passionate about investment and we were young entrepreneurs. We started our first business when we were 7 years-old, so for us it was just another step on that ladder to try and reach the goals that we had.

It appears that for the most part, you have a great brotherly dynamic on screen. What are the rewards and challenges in working so closely with your siblings? You work with your other brother too?

JONATHAN: Yes, there’s a great sibling connection. And, you know, you can’t trust anybody more than your own family. I laugh because people say you should never work with family, and I think it’s quite the opposite. As long as you know everything is still a business.  Everyone knows what role they’re playing and what’s expected of them. We have this dynamic where there’s no drama. We actually call it our “No BS policy.” If something is bothering one of us, we just step back and deal with it.

And our older brother (JD), too. We produce some shows that he’s in. Actually, right now, he’s climbing Mount Kilimanjaro. But we do a lot together and I think that’s a good thing. We can work together, but we know when it’s personal time and we know when it’s business time.

You had a radio show that I listened to yesterday. Do you still do radio?

DREW: “Off Topic” was the name of the radio show that we did, and it was fun. It wasn’t just about real estate. We have a large background outside of real estate. So that was a chance for us to talk about anything and everything under the sun. Some of the topics would come in from our listeners who are more risqué, but it was fun for us to talk about dating, travel, food, celebrity gossip and everything else. We just did a limited run.

JONATHAN: We just did a limited run of 13 of them for fun. And decided whether or not we wanted to keep going. The biggest challenge we have right now is that Drew and myself — we produce 60 hours of original television that we’re in every year, so we don’t have a lot of downtime in order to do anything else. At some point we’ll do it again. We had a lot of fun with it.

You’ve found quite a few surprises while revamping homes to put on the market, like cockroaches. What is the worst thing you’ve encountered and the most challenging to improve?

DREW: The funny thing is the worst is not actually with the house itself. Most of the time it’s with expectations of a client or just a lack of knowledge. Even before we were doing the show — a lot of buyers and sellers — they are most attached to a property and they’ll look blindly at a home that they want. They’ll love a kitchen, but they’ll ignore all of these other issues that will really affect the quality of living in that home. Or even when they’re selling a home — they always think that the house is worth so much more than everyone else’s, even though it’s in really rough shape. So I would say that’s it. It’s trying to snap the clients into reality — to realize unbiased what the home is worth.

JONATHAN: It’s also realizing that unfortunately, a lot of times when someone’s trying to sell their house, if they know there’s a problem, they’ll try and hide it, because they don’t want you to pay less money. And so you have to realize that. When you go in; if there’s large area rugs or furniture covering everything, move that stuff aside, look behind it. Look for any signs of any red flags that could be an issue. Because I have come across houses that we’ve purchased, and maybe there’s a fresh coat of paint — you can smell that they just painted. You have to ask yourself: did they paint because they’re trying to cover something up? Or did they paint just because they wanted to make it look nice? The bad stuff that I’ve uncovered — it turns out they were hiding massive, massive mold and moisture problems. And it ended up costing thousands and thousands of dollars to repair this. Then you have to go back and sue the previous owner for hiding it. It’s a hassle, so, you have to be realistic and understand why people do these things.

READ THE FULL COVER STORY INTERVIEW IN ISSUE 48 OF WWW.LATFTHEMAGAZINE.COM