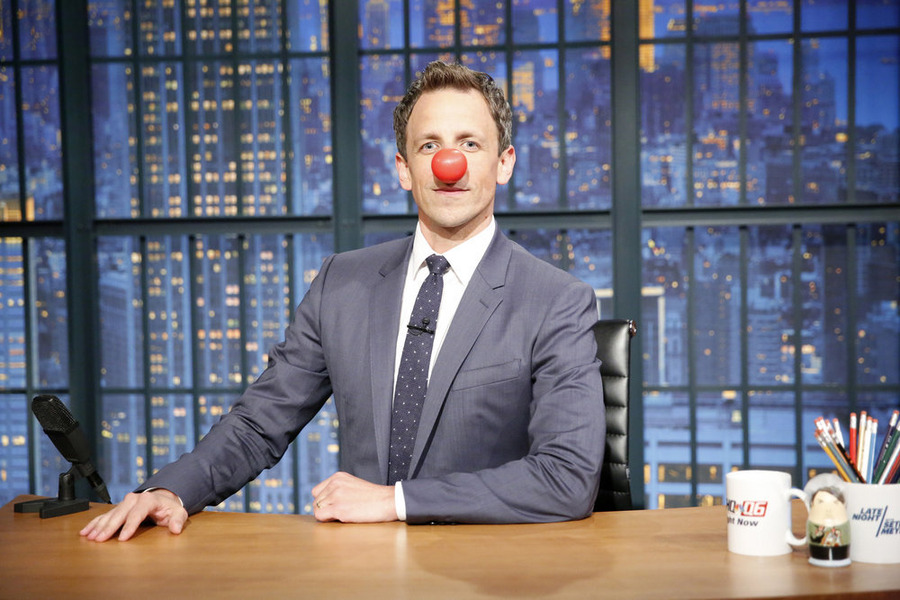 Seth Meyers, David Duchovny and Jane Krakowski will host ‘Red Nose Day,’ NBC’s star-studded charity event airing Thursday, May 21 (8-11 p.m. ET). And Ed Sheeran, Josh Groban, Christian Slater, Al Roker, Andy Cohen, Kellan Lutz and Kermit the Frog are joining the “fun-raising” special to help lift children out of poverty in the U.S. and in some of the poorest communities in the world.

Meyers, Duchovny and Krakowski will each host one hour of the three-hour live event happening at New York City’s Hammerstein Ballroom.  The inaugural benefit will feature great comedy, videos produced by Funny Or Die, incredible music performances and short appeals films shedding light on those in need.

Meyers is an Emmy Award-winning writer and current host of ‘Late Night with Seth Meyers.”  Recently named one of the 2014 TIME 100, Time magazine’s 100 most influential people, Meyers recently hosted the 66th Primetime Emmy Awards.  He began his TV career with “Saturday Night Live” in 2001, where he was a cast member for thirteen seasons.  He was the head writer for nine seasons and ‘Weekend Update’ anchor for eight seasons.  He also executive produces and lends his voice to Hulu’s animated superhero show “The Awesomes.”‎

Duchovny, who stars in the new NBC series “Aquarius,” is best known for the hit series "The X-Files." For his role as Fox Mulder, Duchovny was nominated twice for an Emmy Award for Outstanding Actor in a Drama Series, and won a Golden Globe in 1997. Duchovny won a second Golden Globe for his role as Hank Moody on the Showtime series "Californication."  Additional credits include his Emmy nominated performances in “Life with Bonnie” and “The Larry Sanders Show,” as well as the feature films ‘Kalifornia", "Return to Me" and “Chaplin.” He wrote and directed the feature film "House of D". His first novel "Holy Cow" was released in February and made the NY Times best sellers list. His debut Studio Album "Hell or Highwater" was released this month. He will reunite with Gillian Anderson and Chris Carter to begin shooting the return of "The X-Files" as a limited series next month.

Jane Krakowski was honored with four Emmy nominations for her role as Jenna Maroney on NBC’s Emmy Award-winning series “30 Rock,” as well as a collective 2009 Screen Actors Guild Award for Outstanding Performance by an Ensemble in a Comedy Series.  She was first introduced to the TV mainstream with her Golden Globe-nominated portrayal of Elaine Vassal on the Emmy-winning series “Ally McBeal.”  Working with her “30 Rock” collaborators Tina Fey and Robert Carlock, she currently stars in “The Unbreakable Kimmy Schmidt” on Netflix. She has also guest starred on “Modern Family,” “The Simpsons,” “American Dad” and “Sesame Street.” Jane received the 2003 Tony Award for her portrayal of Carla in the Broadway musical “Nine,” opposite Antonio Banderas. Her performance in “Nine” also earned her a Drama Desk Award and an Outer Critics Circle Award. She earned her first Tony nomination for her work in the original Broadway production of “Grand Hotel.” Krakowski’s feature films include “National Lampoon’s Vacation,” “Alfie,” “Pretty Persuasion,” “Kit Kittredge: An American Girl,” and “Cirque du Freak: The Vampire’s Assistant.” Her upcoming films include the comedies “Big Stone Gap,” “Brother’s Keeper” and “Pixels.”

An incredibly popular annual event in the U.K. that has raised more than $1 billion over the last 30 years, ‘Red Nose Day’ is coming to America for the first time ever on May 21.  It’s a great night of comedy, music and more, all for a good cause. For more information, please go to www.rednosedayusa.org.

Richard Curtis is an executive producer for the NBC telecast (a Universal Television production), along with Hamish Hamilton and Ian Stewart of Done + Dusted Productions. Henrietta Conrad and Lily Sobhani will also serve as executive producers, as will Mike Farah, Anna Wenger and Joe Farrell from Funny or Die. Hamilton is set to direct.