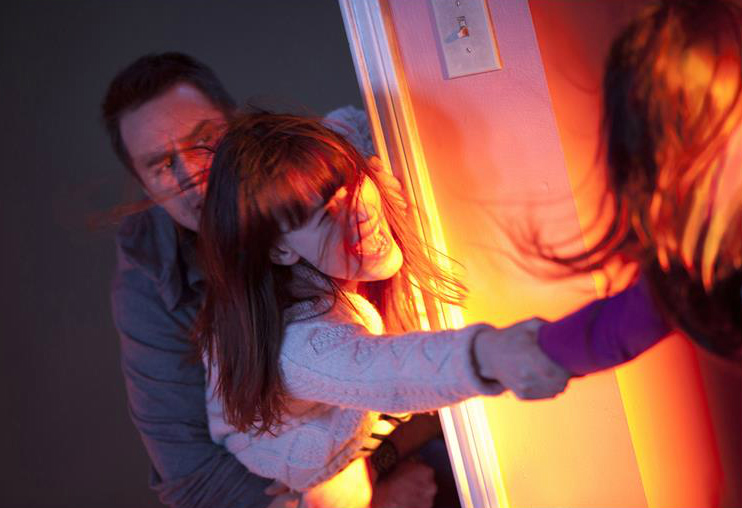 It’s been over thirty years since Steven Spielberg’s brainchild about a suburban family plagued by ghosts sent chills down audience’s spines. Now, with the help of executive producer and “Evil Dead” mastermind Sam Raimi, “Poltergeist” is back with a boo, and the scares are just as bone-chilling this time around.

Unfortunately, it takes less than a night before the house reveals itself to be one of horrors. In short order, Griffin finds a compartment full of creepy clowns in his attic bedroom; electronic devices turn on by themselves; furniture shifts; and objects gravitate toward Maddy’s closet. As if these occurrences aren’t freaky enough, when Maddy has a ghostly encounter with the television set, the supernatural presence is undeniable. The following night, while the parents are at a dinner party, the skeletons literally come out of the closet to abduct Maddy and take her to some sinister alternate universe.

The Bowens turn to the expertise of Dr. Brooke Powell (Jane Adams) and her paranormal psychology team at Illinois State University, who set up shop in the haunted house in hopes of rescuing Maddy from the netherworld to which she’s been taken. However, in all her years in the field, Powell has never experienced a “poltergeist” of this magnitude, forcing her to call upon fellow expert Carrigan Burke (Jared Harris), the fame-hungry host of a reality TV show called “Haunted House Cleaners.” Together, and equipped with the knowledge that the house was built atop a former cemetery, the ghostbusters team up to exorcise some serious demons.

Even though, structurally, “Poltergeist” is a near carbon copy of the original, screenwriter David Lindsay-Abaire manages to modernize the story in a way that makes it stand on its own. One of many enjoyable examples of this is in the teen character Kendra, who is so obsessed with pop culture, texting and FaceTiming that she’s completely oblivious to the horrors surrounding her. And while there are enough tongue-in-cheek references to the original to whet the appetites of fanboys, there aren’t so many that the film veers into overkill.

Director Gil Kenan maximizes the suspense at almost every turn and knows how to play upon audience expectations, clearly taking pleasure in throwing curveballs when we’re expecting the heater. As far as the 3-D goes, a few moments enhance the moviegoing experience but never in that transformative way that underscores the technology’s cinematic possibilities.

With his acting chops and offbeat sense of humor, Sam Rockwell is the perfect surrogate to the paternal role made famous by “Coach” star Craig T. Nelson in the 1982 version. Rosemarie Dewitt is given fewer opportunities to shine than her onscreen husband but she still elevates any role she steps into. As for the Bowen children, Saxon Sharbino is effectively maddening as the tech-crazy teenager and Kennedi Clements shines as the possessed youngest daughter, but as middle child Griffin, Kyle Catlett shows a little too much strain in his performance. Jane Adams and Jared Harris also add panache to their roles as paranormal experts with a romantic history.

With a PG-13 rating, “Poltergeist” may not achieve the shock factor that our desensitized generation has grown accustomed to, but luckily it doesn’t need to be gory to scare the pants off of you. A throwback film that still has feels of a piece with contemporary horror cinema, this frightener is sure to scare up some solid business this Memorial Day weekend.