LeBron James Leads The Cleveland Cavaliers To The NBA Finals 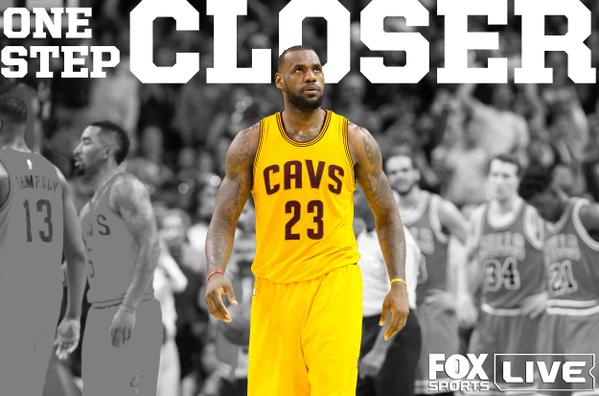 Love him or loathe him, you have no choice but to respect him. I’m talking about the Cleveland Cavaliers forward LeBron James, who has been dubbed “King James” by the media for most of his illustrious career. And make no mistake about it; James is widely considered the undisputed king in the game of professional basketball. Called by many the “best player on the planet,” James is making his 5th consecutive trip to the NBA finals, after eliminating the 60-win Atlanta Hawks by sweeping them 4-0 in the Eastern Conference Finals. But what is most remarkable is that his appearances are with 2 different teams. Four times with the Miami Heat and his cronies Dwyane Wade and Chris Bosh, and currently with the Cavaliers and his new supporting cast Kyrie Irving and an injured Kevin Love,who is getting a ride during his first playoff appearance and NBA finals appearance.

Love suffered a season-ending shoulder injury in the first quarter of game 4 of the opening series against the Boston Celtics. But that, nor the knee and foot injury to rising-star Irving, has slowed down a determined James who has willed and played his team into the finals the first year of his return. Nobody expected the Cavaliers to come out of the east this year, especially when the team and the rookie head coach Dave Blatt were new to each other. James told the city and the press to “be patient” at the beginning of the season, because “these things take time when you’re trying to build a championship team.” To say that the team is ahead of schedule, is an understatement. The mid-season acquisitions of J.R. Smith, Timofey Mosgov and Iman Shumpert that Cavalier’s General Manager David Griffin orchestrated, transformed the Cavaliers from a good team into a great team capable of contending for a championship. And that’s exactly what they will do beginning June 4th against the winner of the Golden State Warriors and Houston RocketsWestern Conference finals, with the Warriors holding a 3 games to 1 lead. The likely opponent is the Warriors, but the Rockets did come back from the grave after being down 3 games to 1 in the semi-finals series against the Los Angeles Clippers. The question is; do the Rockets have another comeback in them? However unlikely that is, it’s not over until the fat lady sings. Meanwhile, King James awaits the winner, and it’s impolite to keep the king waiting.