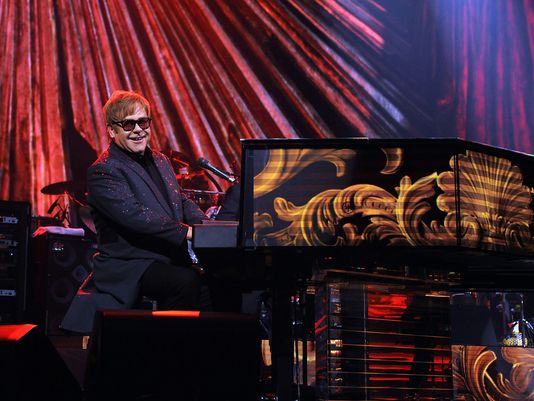 On Monday, March 23, Elton John will celebrate the 100th performance of his critically-acclaimed show, “The Million Dollar Piano,” at The Colosseum at Caesars Palace with a sold-out crowd of fans. To mark the milestone, Caesars Palace and AEG Live have just announced plans for Elton to return to The Colosseum in October 2015. Tickets for 11 performances will go on sale Sunday, March 22 at 10 a.m. PT. World-renowned singer, songwriter and performer Elton John made a triumphant return to The Colosseum at Caesars Palace with his all new show, “The Million Dollar Piano” in Sept. 2011. At the centerpiece of the performance is the show’s namesake piano, an engineering marvel featuring more than 68 LED video screens created by Yamaha.

Elton John’s band includes Nigel Olsson on drums, part of Elton’s original three-piece band, as well as musical director Davey Johnstone (who first recorded with Elton in 1971 and joined the band a year later) on guitar, Matt Bissonette on bass, John Mahon on percussion, and Kim Bullard on keyboards, with a special appearance by percussionist Ray Cooper. “The Million Dollar Piano” features iconic hits and classic album tracks from throughout Elton’s incredible five-decade career, including a selection of songs from his highly-acclaimed 16 times platinum remastered album “Goodbye Yellow Brick Road,” which recently celebrated its 40th anniversary.