The Tooth Fairy Is Giving Millions Each Year 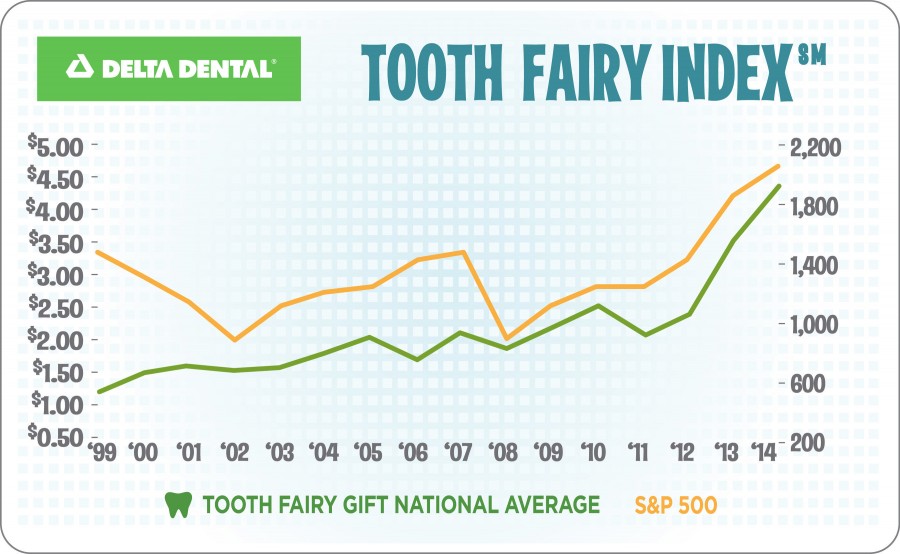 The Tooth Fairy is rich, or at least he/she was rich before they handed out millions to children losing their teeth. The average gift from the Tooth Fairy reaching a new high of $4.36 last year, up from $3.50 in 2013, according to Delta Dental's The Original Tooth Fairy Poll®. In 2014, the Tooth Fairy left a staggering $255 million for lost teeth based on Delta Dental estimates.

The Original Tooth Fairy Poll has generally been a good indicator of the economy's overall direction. In fact, the trend in Tooth Fairy giving has tracked with the movement of the Standard & Poor's 500 index (S&P 500) in 11 of the past 12 years. In 2014, both the average Tooth Fairy gift and the S&P 500 posted double-digit gains for the third year in a row, with 24.6 percent and 11.4 percent increases respectively.

Delta Dental's survey found that in 88 percent of the homes she visited, the Tooth Fairy left cash for kids, either by itself or in combination with other gifts. Kids who got a gift in addition to or instead of cash most often received a toy, game, toothbrush, toothpaste, book, doll, stuffed animal or dental floss.

Other findings from The Original Tooth Fairy Poll, which surveyed more than 1,000 parents nationwide, include:

Film
Box Office: Will Smith Is Back On Top With "Focus" At #1