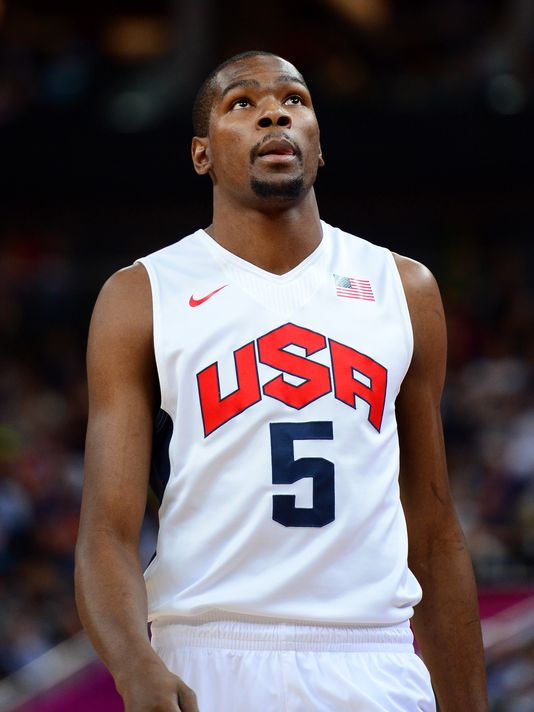 Oklahoma City Thunder star Kevin Durant will not play for Team USA in the FIBA World Cup later this summer in Spain, citing mental and physical exhaustion.“This was an extremely difficult decision as I take great pride in representing our country,” Durant said in a statement. “I know that I owe it to my USA Basketball teammates to be totally invested in the experience. After going through training camp with USAB, I realized I could not fulfill my responsibilities to the team from both a time and energy standpoint. I need to take a step back and take some time away, both mentally and physically in order to prepare for the upcoming NBA season. I will be rooting for USAB and look forward to future opportunities with them.”“Kevin … expressed that he is just physically and mentally drained from the NBA season and his attention to his many responsibilities,” chairman Jerry Colangelo said.

“He tried to give it a go at our recent Las Vegas training camp but felt coming out of camp that he was not prepared to fulfill the commitment he made to the team. “Coach K (Mike Krzyzewski) and I fully support Kevin. His well-being is the most important thing to us and we support him taking the time to get ready for next season. He’s been part of the National Team program for eight years and a big part of the success we have achieved, and we look forward to him being part of our success in the future as well.” His departure could have a major affect on a severely depleted frontcourt. Small forward Paul George was injured in an exhibition last week, while power forwards LaMarcus Aldridge and Kevin Love pulled out previously. USA Basketball is adamant Durant’s decision has nothing to do with George’s devastating injury sustained last week in an exhibition game. Thunder teammate Russell Westbrook also pulled out of the event, citing his knee injuries last season.

Lifestyle
Southwest Flies On The Shark Week Wagon With Discovery