Movie Review: Tom Cruise Is Back In Blockbuster Form In "Edge of Tomorrow" 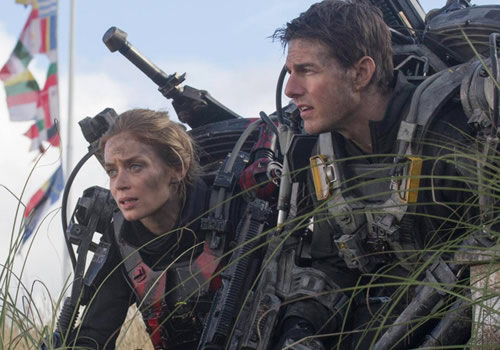 Over the course of Tom Cruise’s illustrious — three-time Oscar nominated — acting career, the man has battled countless aliens, Nazi soldiers, and even ancient Samurai. Yet, his biggest foe these days might be the box office. The action icon hasn’t released a single $100+ million grossing movie since 2011’s “Mission Impossible: Ghost Protocol.” The debut of this Friday’s “Edge of Tomorrow,” however, looks to change all of that. With a plot that mixes the run and gun style of the “Halo” video game series with the twisty storytelling of the Bill Murray classic “Groundhog Day,” Tom Cruise is back to his butt kicking former self. Even with a crowded blockbuster release schedule that features Marvel super heroes, mechanized Transformers, and a hulking Godzilla, there is no denying that Cruise is still very much capable of headlining a big budget action epic.

Directed by “Bourne Identity” helmer Doug Liman and written by a trio of screenwriters — Christopher McQuarrie (The Usual Suspects), Jez Butterworth (Fair Game), and John-Henry Butterworth (Fair Game) — “Edge of Tomorrow” is set in a dystopian near future where an invading alien species, known as Mimics, has decided to lay siege on the world.  With a few choice news segments that highlight the brute force of this space scourge, it’s made explicitly clear that these outer space foes aren’t the average, run of the mill, jolly green Martians. They’re fast, illusive, and absolutely deadly. Luckily for Earth’s human population, the world’s armies have joined forces and developed a new super-mech soldier suit to counter this alien threat. 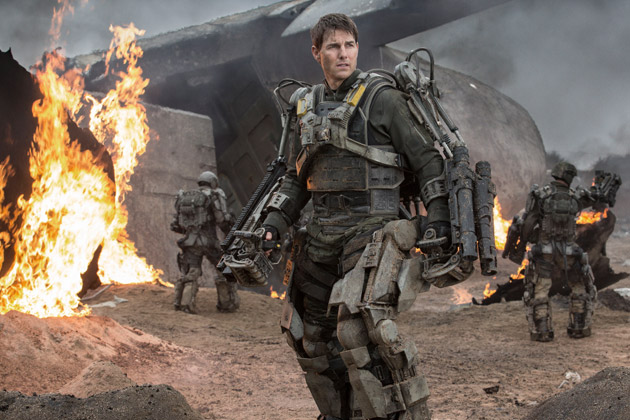 This brief history lesson gives way to the introduction of Tom Cruise’s William Cage character. Essentially a high-ranking US military spokesman, Cage is everything a true soldier isn’t. Squeamish around blood, horrible when it comes to authority, and smug in a way that only Cruise knows how to pull off, Sergeant Cage used to run his own Ad agency before the war. But after he upsets a superior (Brendan Gleeson), he finds himself demoted and stationed on the front line for a D-Day style attack against the aliens.

Strapped into his mech-suit, it doesn’t take long for Cage to realize he doesn’t stand a chance on the battlefield. He doesn’t even know how to disengage his weapon’s safety switch! But a funny thing happens when Cage meets his unpleasant demise. Seconds after his death, he wakes up to discover that he’s back at the beginning of the previous day. Over and over and over again, no matter what the Sergeant does, his death reverts him back to the same point. Unsure what’s going on and unable to convince anybody of what he’s experiencing, Cage finally finds a much needed ally in war hero Rita Vrataski (Emily Blunt). Together, the pair have to figure out how to keep Cage alive long enough to destroy the Mimic’s one weak spot — it’s Queen. 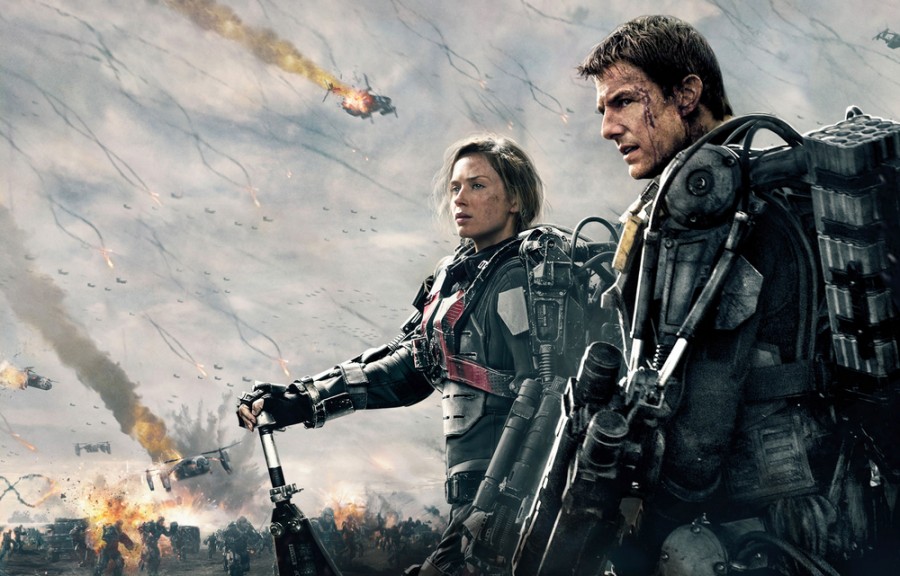 Film Buffs will certainly point to Bill Murray’s comedy “Groundhog Day” as a likely inspiration for “Edge of Tomorrow.” But in fact, the movie is based on Hiroshi Sakurazaka’s novel “All You Need Is Kill.”  No matter where this loop-de-loop story concept comes from, there’s no need to worry that the film’s repetition of events ever becomes boring. The movie’s gang of screenwriters, along with director Doug Liman and editor James Herbert (Gangster Squad), up the action ante every time Cage dies, and continuously bring new and exciting elements into the plot mix.

Liman, working with Special Effects technician Vince Abbot (Gravity) and Set Designer Elli Griff (Gladiator), immerse the audience in a rich dystopian world and create countless breathtaking action scenes. From the London beach battle that accentuates the daily fight, die, repeat routine of Sargent Cage, to the much more intimate training sequences with Rita Vrataski, there are plenty of big budget special effects to dazzle even the most hardened sci-fi aficionado.

This attention to action, however, is expected from the same director of such successes as “Mr. and Mrs. Smith” and “Jumper.” What comes as a pleasant surprise, however, is the film’s subtle, black humor. When dealing with a PG-13 plot that relies heavily on the theme of death, it comes as a relief that the screenwriting crew decided to lighten the mood with plenty of genuinely funny mischief and hijinks throughout the picture’s 113-minute runtime. 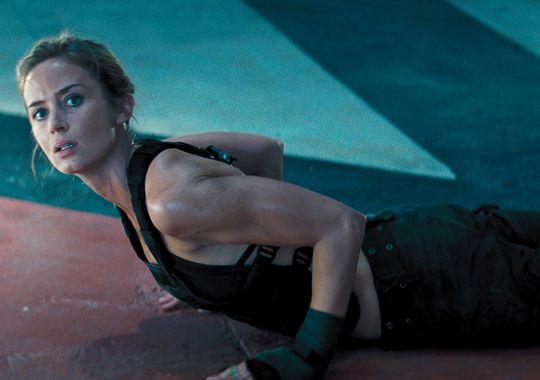 Cruise, who is no stranger to comedy, is perfect in the role. While tough and macho when the occasion calls for it, Cruise is much more the quirky everyman this time around. This type of character works for the actor, and even those members of the audience that don’t necessarily agree with the leading man’s off-screen lifestyle will have trouble finding fault with his on-screen persona.

Along with Cruise, both Emily Blunt and Bill Paxton are excellent in their supporting roles. Blunt, who plays the film’s main love interest — this term is used loosely as “Edge of Tomorrow” doesn’t concern itself with very much romance — is fantastic as the war hardened Rita Vrataski. Picking up where she left off in 2012’s “Looper,” Blunt is becoming a formidable action star despite her “The Devil Wears Prada” breakthrough hit. Bill Paxton, on the other hand, puts in a fantastic light-hearted performance.  While not as deep as the characters Blunt and Cruise play, he is a scene stealer as the Kentucky born Master Sergeant Farell.

As Cage dies, wakes up, and dies again, the logic does get lost as the film progresses. No matter how convoluted the film becomes, however, there is no questioning the fact that “Edge of Tomorrow” is narratively sophisticated compared to many of the other tentpole flicks this summer. And while it might be hard for the film to overcome the established fan bases of many of these other action offerings, “Edge of Tomorrow” doesn’t deserve to be overlooked.

Unlike Sergeant Cage, we’re only given one life to live. With that being said, there are definitely worse ways to spend two hours than seeing “Edge of Tomorrow” this weekend.