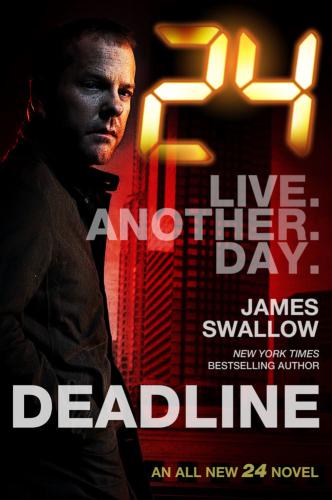 The groundbreaking television phenomenon "24" returned May 5, 2014 for a twelve episode arc, and Tor/Forge Books, in conjunction with Twentieth Century Fox Consumer Products, will release 24: Deadlineon August 5, 2014 to answer the question of what happened to CTU agent Jack Bauerbetween the thrilling final moments of the last season and his heroic return this Spring.

24: Deadline is an all-new adventure written by three-time New York Timesbestselling author James Swallow. Swallow has previously worked on such franchises as Star Trek, Stargate, and Doctor Who, in addition to being a BAFTA nominee. This hardcover novel will go on sale August 5, 2014 at $24.99 and will be available wherever books are sold. Mimicking the format of the TV show, the book will equal 24 hours in Jack's life, just as each season of the show is 24 hours. 24: Deadline will be the first of three tie-in novels from Tor/Forge Books and Twentieth Century Fox Consumer Products.

On May 5, 2014, Jack Bauer returned in "24: Live Another Day" to restart the ticking clock on the groundbreaking and Emmy Award-winning drama. 24: Deadline will answer some of the questions of what happened to Jack in the four years between the end of season eight and the new "24: Live Another Day" event series.

One hour after the dramatic conclusion of "24" Day eight, former federal agent-turned-fugitive Bauer dresses his wounds and considers his next move. With his former colleagues in the Counter Terrorist Unit now dead, under arrest, or shut down, Jack has no resources to call upon, no back-up and nowhere to go – only his determination can drive him on. One thing remains clear to him: the promise he made to his daughter Kim. Jack vows that he will see Kim one last time to tell her he loves her… before he drops off the radar forever.