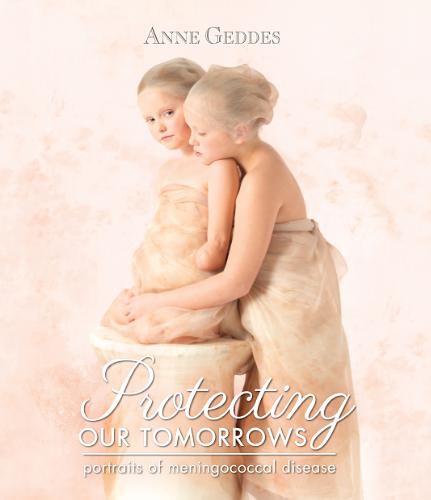 The book celebrates young, resilient survivors of meningococcal disease—a sudden, aggressive and life-threatening disease—through thought-provoking and moving photographs captured by Ms. Geddes. The full collection of images of the survivors and their families is available for free, exclusively on iBooks today at iTunes.com/ProtectingOurTomorrows.

"One of my main goals with this series was to capture the inspiration and strength of these young survivors," said Ms. Geddes. "I hope these photographs convey three key messages: to recognize the symptoms of meningococcal disease, act quickly and decisively and to talk to your doctor about vaccination for preventing this devastating disease. This series is a reminder that as adults and parents, we need to protect and advocate for the promise of our children when they are in their most vulnerable years."

In partnership with Novartis Vaccines, the campaign's global sponsor, the Confederation of Meningitis Organisations (CoMO) and charity organizations around the world, Ms. Geddes has traveled across the globe - Australia, Canada, Brazil, Germany, Ireland, Spain, the United Kingdom and the United States - to meet 15 meningococcal disease survivors and their families, and depict their experiences through photography. As global project ambassador and creative director, Ms. Geddes, has also worked to foster awareness and encourage meningococcal disease education through local media, advocacy and policy-maker/stakeholder engagements.

The book's publication is the culmination of the worldwide Protecting Our Tomorrows: Portraits of Meningococcal Disease campaign that Ms. Geddes has been an integral part of since the project began last year. Throughout the campaign, Ms. Geddes's touching journey has been chronicled on the campaign's Tumblr page (http://protectingourtomorrows.tumblr.com), an online hub which features behind-the-scenes photos and videos, select images of the survivors and information on meningococcal disease.

Protecting Our Tomorrows by Anne Geddes is available worldwide for free, exclusively on iBooks at iTunes.com/ProtectingOurTomorrows.

Lifestyle
Weekend Book Corner: This One's For The Golfers