Bob Barker Is Back On TV Promoting Animal Activism 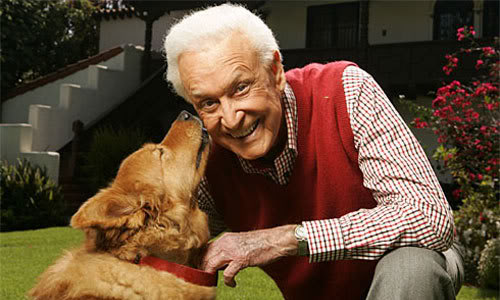 Multiple Emmy Award-winning television icon and animal rights activist Bob Barker will return to CBS Daytime in a guest-starring role on THE BOLD AND THE BEAUTIFUL onWednesday, April 30 (1:30-2:00 PM, ET; 12:30-1:00 PM, PT), on the CBS Television Network, when the daytime drama features a three-day arc about animal rescue. This will mark Barker's second appearance on the show. His first was in March 2002.

In Barker’s cameo role, the long-time animal rights supporter is interviewed by Liam Spencer (Scott Clifton) for a feature article on the issues surrounding control of the pet population. “Animals can’t speak for themselves, they depend on us to protect them,” Barker explains during the scene.

“In keeping with our commitment to spotlight real-life Los Angeles heroes, we are focusing this story arc on the work of animal care and rescue in our city’s shelters,” said Executive Producer and Head Writer Bradley Bell. “Having iconic TV personality and animal activist Bob Barker on the show is an honor. Bob is a highly respected advocate for animal rights and is an instrumental player in the storyline. Additionally, Los Angeles City Councilmember and former Police Chief Bernard Parks guest stars in a cameo role. Mr. Parks traveled on location with us to the South Los Angeles Animal Shelter, a remarkable facility for the care and rescue of animals that he was instrumental in building in his district. Both of these men are true heroes, and I am pleased that they are representing this important issue on THE BOLD AND THE BEAUTIFUL.”