Movie Review: "Divergent" Is Anything But Divergent 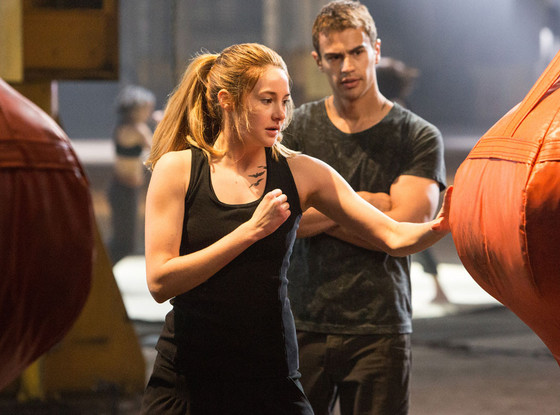 The age old saying “there’s nothing new under the sun” has never been more appropriate than when it comes to “Divergent,” the latest post-apocalyptic Young Adult novel turned feature film from the studio that spun out “The Hunger Games” and “Ender’s Game.” Haphazardly constructed using bits and pieces of discarded YA fiction parts, this overly long teen sci-fi melodrama definitely doesn’t “diverge” from the normal cinematic path.

Standing in for Katniss Everdeen and Ender Wiggin is Tris (short for Beatrice), played by Shailene Woodley from last year’s unexpected hit “The Spectacular Now,” but most notably the lead in the ABC Family original series “The Secret Life of an American Teenager.” Tris, just like her fellow teenage heroes, is a self-confident youngster who must break the rigid, dystopian caste system she was born into in order to disrupt the unfair social hierarchy that confines her. 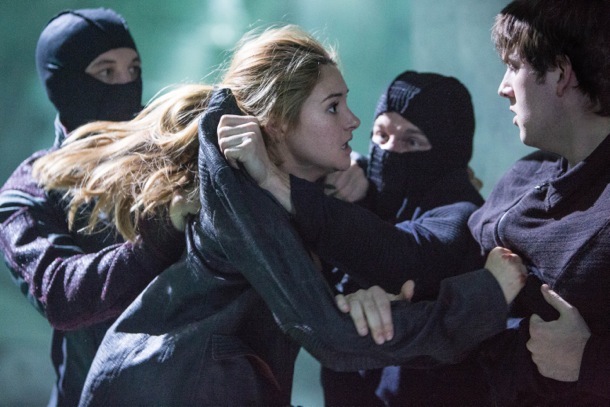 Sound familiar? That’s because it is. Instead of Panem we get future Chicago. Instead of districts, there are factions. And instead of Katniss’ skill with the bow and arrow, Tris is good at…using her mind?

This is where the film begins to show its many flaws. In setting up the story, screenwriters Evan Daugherty (Snow White and the Huntsman) and Vanessa Taylor (Hope Springs) pace the script as if they were simultaneously chugging energy drinks while writing it. The pair zip right through the entire first chunk of the book, the section that explains the five factions — abnegation, candor, amity, erudite, and dauntless — that every member of future Chicago belongs to and the process of how one chooses to join each caste. This segment is also where Tris’ exceptional talent first comes into play. During her assignment test, a hallucinatory simulation experience that all teenagers must take in order to be properly allocated to a faction, her results come up as being divergent. What this means is that whereas 99.9% of the population fall easily into one category, she is equally capable of joining three. 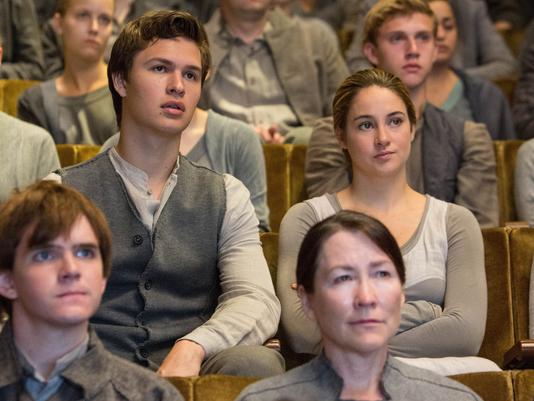 Just like every budding teenager is faced with difficult choices, Tris finds herself struggling to decide where she belongs in life. Eventually, however, she chooses to join the Dauntless clan, the rough and tumble group of men and women that police the city. Before Tris can even say goodbye to her friends and family in her Abnegation home, she is shipping off to the Dauntless residence to begin her training.

There is admittedly a lot going on in “Divergent.” And with a running time of over two and a half hours, the film covers a lot of the material from the novel. Yet in doing so, all of this background information, the information that I just spent two long paragraphs explaining, doesn’t make it into the final product.

Fans of the book will be able to follow along, but newbies to the series will be left scratching their heads as the story bounces from scene to scene without slowing down long enough to allow them to catch up. Just like Tris and her fellow recruits are forced to hop on a speeding train on their first day as “initiates” to the faction, most of the audience will feel like they couldn’t jump on in time.

Even though the script plays like a highlight reel of action-packed events instead of a coherent story, the film’s impressive cast goes a long way in making the picture at least slightly enjoyable. 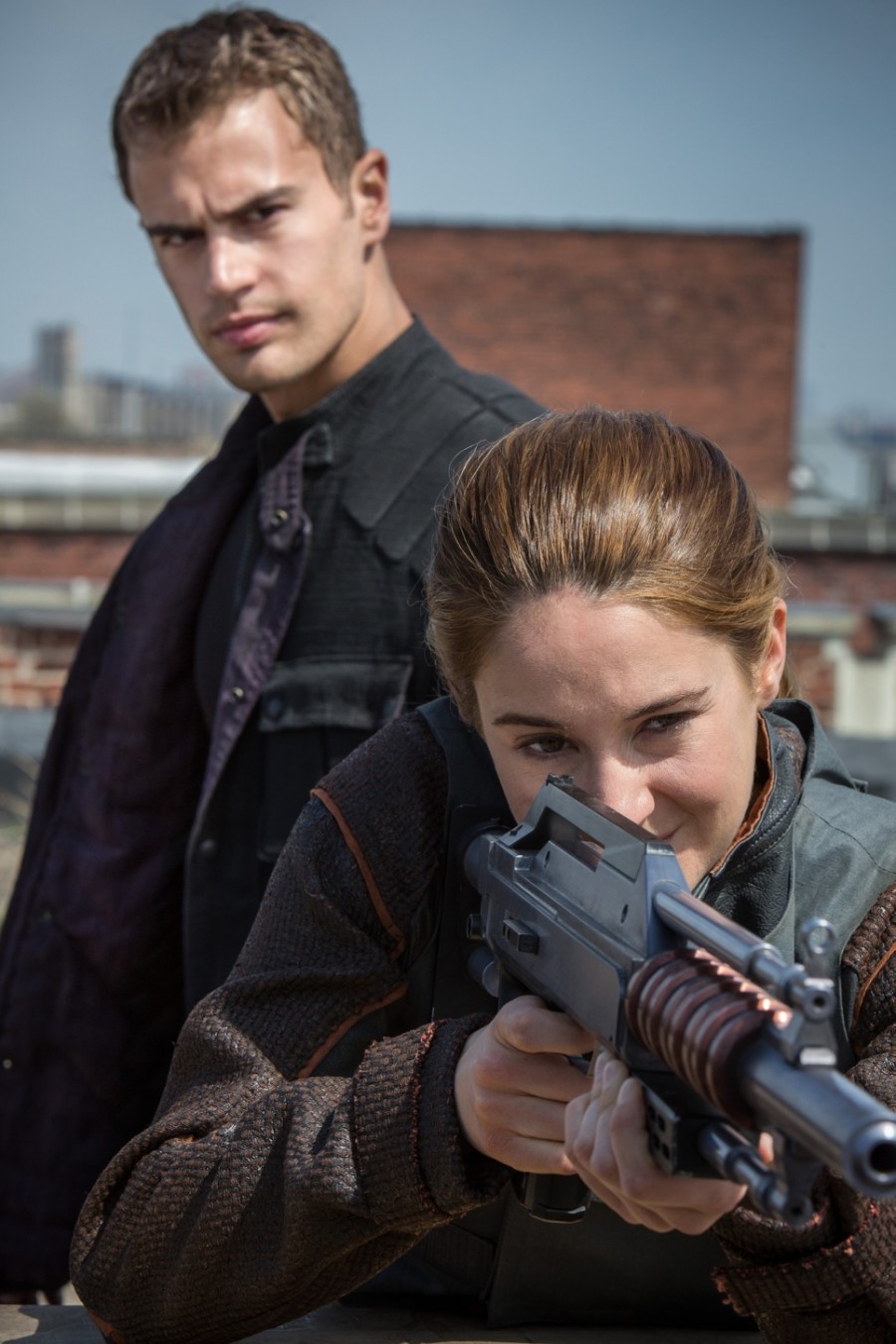 After coming up second to Jennifer Lawrence in “The Hunger Games” a few years back, Shailene Woodley gets the opportunity to prove that she is fully capable of becoming a teen icon. Handling the sci-fi elements and romantic moments with equal ease and poise, she will no doubt make an indelible mark in Hollywood in the near future. If only the material were better, this could’ve been her big break.

Playing the film’s antagonist, Kate Winslet is absolutely chilling as the leader of the Erudite faction. Keeping with this underused trend, the actor is only highlighted sparingly at the very beginning and end of the film. Nonetheless, the British Oscar-winner definitely classes this big budget studio pic up.

This dearth of screen activity is even more unkind to Ashley Judd. Playing Tris’ mother, she is all but forgotten before the film really picks up speed.

With an onslaught of stunts and sci-fi violence filling in for any actual acting, director Neil Burger and cinematographer Alwin H. Kuchler (R.I.P.D.) pound the audience with so much high-octane nonsense, they completely numb them from feeling any tension whatsoever when a character is in peril. In the end, the movie never really let’s us get to know Tris and her friends well enough that we care whether they succeed or fail.

From its slick trailers, hip cast, and even trendier music score (Ellie Goulding in all of her techno-pop glory), it’s no secret that “Divergent” is being marketed as the next “The Hunger Games.” It also doesn’t hurt that both are based on best-selling novels, have strong female leads, and take place in post apocalyptic versions of the USA. Unfortunately for Lionsgate and their Summit banner, this two-hour plus clunker proves to be the antithesis of what its title suggests. Neither unique nor different, director Neil Burger’s (Limitless) take on the book, ends up conforming to the rest of the teen centric films currently making the rounds at the Box Office.

Rated PG-13 for intense violence and action, thematic elements and some sensuality