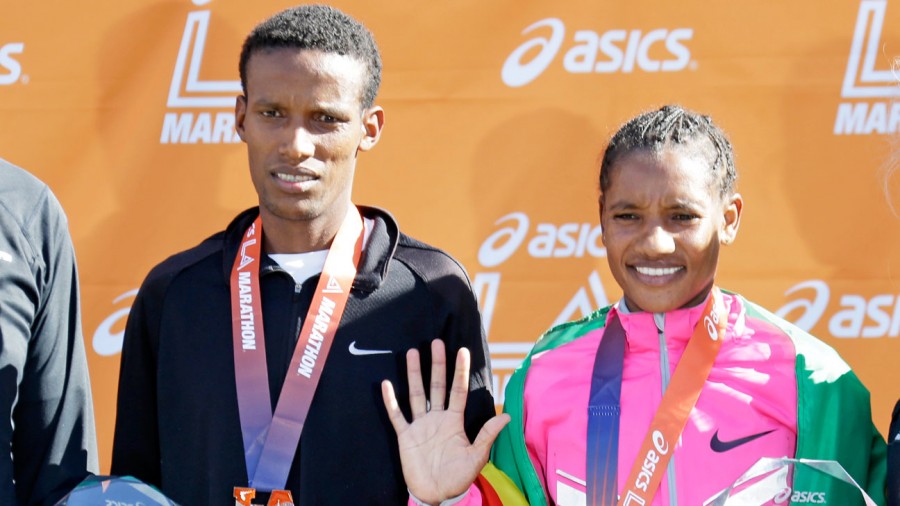 The Los Angeles Marathon took over LA from the East to West side on Sunday morning. Out of the 25,000+ runners, Amane Gobena came in first place. The 31 year-old Ethiopian woman's completing time was 2 hours, 27 minutes, 37 seconds. This is the second marathon she's finished in two months. The last was in Dubai, where she finished in sixth place.

The men's champion of the LA Marathon was Gebo Burka, who crossed the finish line 41 seconds after Gobena. The women started 17:41 ahead of the men. So what did Gobena win? A $50,000 bonus for being the first elite runner to finish. She also won a $25,000 first prize as top woman.

"I'm building a house, and definitely that home will be paid off," Gobena said through an interpreter. Gobena finished second at the LA Marathon in 2009.

Burka clocked his best time since a 2:10:18 in Cannes, France, five years ago. Through an interpreter, he said he has been sick the last three years but has since returned feeling strong.

"(Through) the instruction of my coach, I cut my amount of exercise, so I was able to save me energy and accomplish my goals," Burka said.

Giving Back
"20 Feet From Stardom" Documentary Receives Award For Inspiring