It's Almost "Toscars" Time In Hollywood 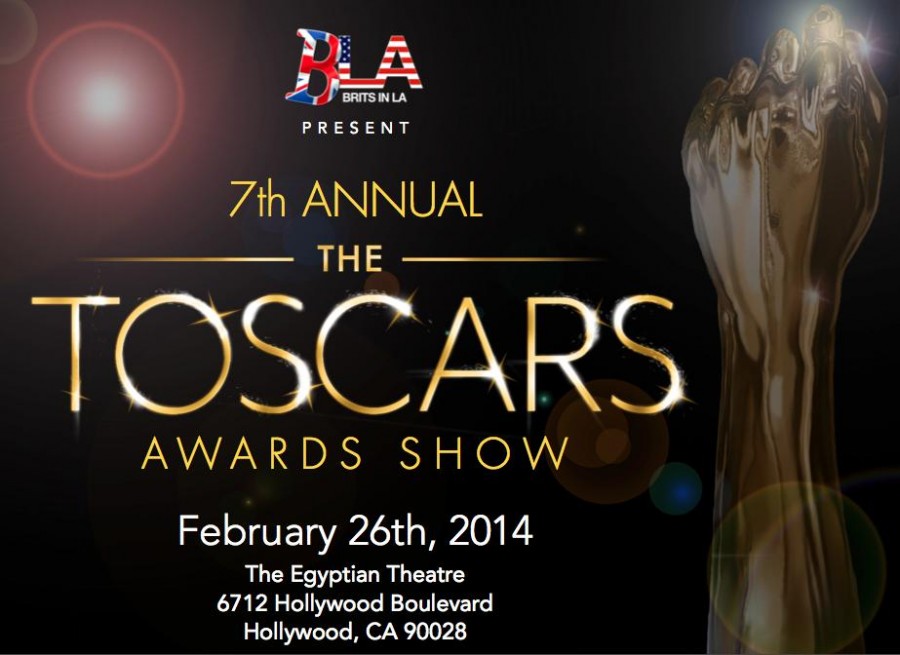 No it's not the "Oscars"... it's the "Toscars," a parady of the biggest award show of the year. Brits in LA, with presenting partner Jaguar North America announced that the 7th Annual “Toscars" at The Egyptian Theatre, Hollywood, CA, will take place on the evening of Feb 26, 2014, benefiting the UKares Foundation charity.

Last year's parody of Les Miserables renamed Miserable Lesbians took home the big prize and went on to become a stage show which toured London’s West End, Off Broadway and the Edinburgh Fringe.

Ten teams of ten people have 3 weeks in which to make spoofs upon the nominated films for Best Feature at the Academy Awards. The Whacademy made up of a team of experts in their field, hand selected from the Entertainment industry, decide the winners in ten categories including Best Whactor and Whactress. This year's comedy event will be hosted by Glee's Alex Newell, who plays Unique on the show.

Past celebrities have included Bruce Vilanch, Janina Gavankar, Siobhan Fahey, Skeet Ulrich, Entourage Rex Lee and Academy award nominee, Eric Roberts, who stated "It was more fun than the real show." As The Toscars grows so has the talent who get involved. This year Tim Russ who plays the Vulcan, Tuvok on the popular TV series "Star Trek: Voyager" got to direct the parody of Gravity called "Cavity" and retired adult-film actor Ron Jeremy gets to star in his first ever PG -13 movie in "British Hustle": The Parody of "American Hustle". Mr. Jeremy who has most recently had a whopping 2 million youtube hits of his parody of Miley Cyrus' "Wrecking ball" is nominated for best Whactor. Other well-known names who have starred in previous Toscar films are Luke Evans (Fast and the furious 6, Dracula),Tehmina Sunny (Argo, The Following), Jennifer Page (The Master) and British TV star Dawn Porter.

This year’s highly anticipated panel of celebrity judges has been announced: Jim Piddock (Best in Show, Epic Movie) The very handsome British actor, Owain Yeoman (The Mentalist) Funny Lady Jennifer Elise Cox, World renowned DJ, Paul Oakenfold will be judging the original scores of the films and many others to be added.

The Toscars was inspired by the Michel Gondry movie 'Be Kind, Rewind" starring Jack Black and Mos Def, in which they have to recreate blockbuster movies on a shoestring budget. Actor and Co-creator Craig Robert Young said "It just seemed like a great way to have some fun with other people in the industry and raise some money for a good cause. We aren't poking fun at the Oscars, so much as we are paying respect with a cheeky nudge and a wink in our very British humourous way. We are also delighted that Jaguar North America are presenting partners this year, especially as they recently debuted their first ever Super Bowl ad “Rendezvous” starring three iconic British actors, as part of their “British Villains” campaign,  - a partnership with Brits in LA seemed like a perfect fit. We look forward to a fruitful long-lasting relationship with Jaguar and thank them for their support" --