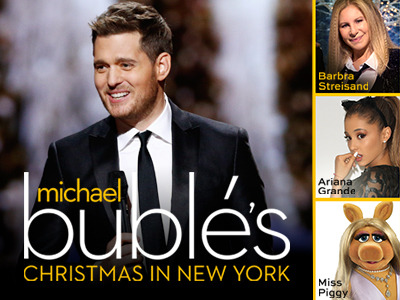 Barbra Streisand, Ariana Grande, Miss Piggy and The Rockettes join Bublé for an hour-long celebration of Christmas, his favorite holiday. Song selections include festive classics such as “It’s Beginning To Look A Lot Like Christmas,” “Christmas (Baby Please Come Home),” “All I Want For Christmas Is You” and more. Bublé will be also accompanied by his band for an “unplugged” series of songs requested by his social media followers, including “I’ll Be Home For Christmas”, “Cold December Night” and “Blue Christmas”. The show originates from the storied Radio City Music Hall in New York City.

“I could not be more excited to celebrate the Christmas holidays in New York with such a fantastic array of talented women. I think my 4th holiday special for NBC may be the very best yet. I can’t wait for everyone to see it,” commented Bublé.

In 2011, Bublé released the album “Christmas” and hosted his first NBC special, “A Michael Bublé Christmas.” Bublé brought his special to his hometown of Vancouver, BC for “Michael Bublé: Home for the Holidays” in 2012 and “Michael Bublé’s 3rd Annual Christmas Special” in 2013.