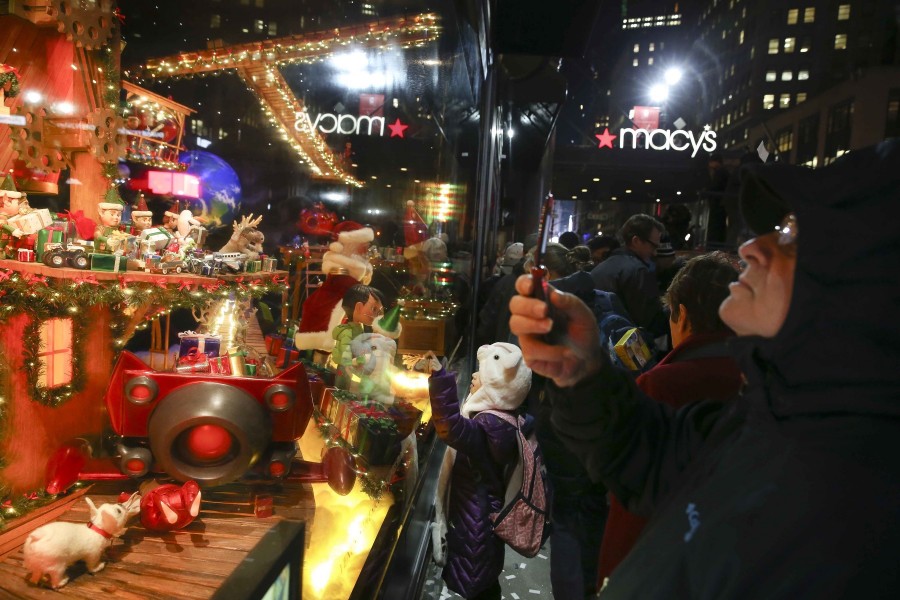 All systems are go and the holiday season is clear for takeoff at Macy's Herald Square with the unveiling of its 2014 Christmas windows. Titled "Santa's Journey to the Stars," this year's seasonal spectacular traces the adventures of Alex, a young boy who receives a magical and mystical telescope that enables him to experience the wonder of Christmas on other planets before landing back on Earth at the iconic Macy's Thanksgiving DayParade.

Accompanied by his dog Bella and escorted through the galaxy by none other than the one-and-only Santa Claus, Alex's otherworldly voyage will amaze and enchant children of all ages as they too embark on their very own out-of-this-world adventure.

Created by Roya Sullivan, award-winning designer and Macy's National Director of Window Presentation, Macy's 2014 Christmas windows combine the wonder of modern technology with stunning visual elements and a dose of nostalgia. Following a child's imaginary journey through space, the six Broadway windows will showcase one-of-a-kind planet-scapes, countless custom designed toys, handmade elves and an interactive game, all accented by thousands of LED lights. Nearly 85% of the installation is foam, with sculptures carved and treated to resemble a wide variety of textures and effects, such as the surface of the moon, or the gleaming face of one of the celestial beings within. In addition, spectators will be able to watch the story unfold chapter-by-chapter in animated form with the assistance of high definition video monitors set within each window.

According to Sullivan, "This year's Christmas windows will symbolize the power of magical thinking and the tradition of storytelling where we celebrate, not only children's imagination, but our own inner-child. We have combined our homage to today's tech-savvy child with a nostalgic dream to travel through space with Santa. This theme is brought to life by combining the technological and interactive elements with old school artistry forming a unique marriage resulting in something original and artistic."