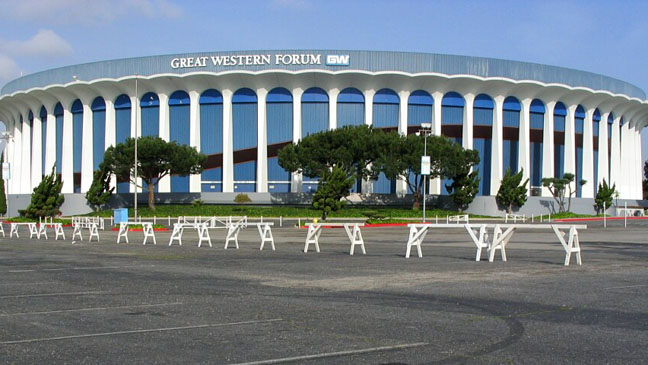 The Madison Square Garden Co., has purchased the run-down former home of the Los Angeles Lakers for $23.5 million, and announced plans Tuesday to commit the money to revitalize the stadium in Inglewood with banking firm Chase as a “presenting partner.” Between the purchase price and the upcoming improvements, the company says it will have spent $100 million on the Forum. The Forum will reopen Jan. 15-17 with a series of Eagles shows dubbed “History of the Eagles,” which will feature songs that the band has never before performed live. In making the announcement, Madison Square Garden executive chairman James Dolan gushed about music-industry veteran Irving Azoff, manager of the Eagles and founder of Azoff Music Management.

Azoff, Dolan said, “brought this opportunity to our attention. Irving’s prominence in and knowledge of the L.A. market, along with his unmatched success in the music industry, are what led us here today. He knew that the Forum was a venue that artists loved to play, and that MSG could make this historic venue great again.” Dolan explained that the Forum is being revitalized with a focus on music and entertainment as opposed to sports. When done, it will feature a flexible seating capacity of 8,000-17,500 along with several high-tech features and a tinted glass wall separating the concession area from the arena floor. Signs will read “The Forum Presented by Chase.” The famed Forum Club “will be completely re-imagined with thematic music-inspired detailing,” and there will be a new “Chase Lounge,” MSG said. The Forum first opened in 1967, and in its glory days, it hosted the likes of Bruce Springsteen, Elvis Presley, the Rolling Stones, Prince and Led Zeppelin. But it lost the Lakers, fellow NBA team the LA Clippers and the Kings hockey team as primary tenants after the Staples Center opened in 1999, and the Forum was sold to Faithful Central Bible Church shortly thereafter.