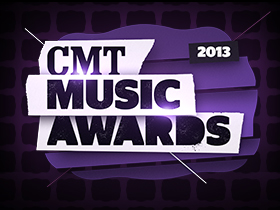 Nashville is gearing up for its biggest party of the year tonight: the 2013 CMT MUSIC AWARDS. It's set to air LIVE at 8:00 p.m., ET/PT on CMT and CMT.com. The 2013 CMT MUSIC AWARDS will feature the most performances in a CMT awards show EVER, and this year will include special performances by rocker Lenny Kravitz teaming up with Jason Aldean, and rapper Nelly joining Florida Georgia Line on their hit “Cruise.” Kacey Musgraves is also set to perform on the live show, marking her first time as a CMT awards mainstage performer. The star power continues to increase as this year’s show open will include appearances by Blake Shelton, Carrie Underwood, Dr. Drew, Kelsey Grammer, Lorraine Bracco, Luke Bryan, Reba and Vince Vaughn.

Hosted by Jason Aldean and Kristen Bell, the 2013 CMT MUSIC AWARDS will include performances by Carrie Underwood, Darius Rucker, Florida Georgia Line, Hunter Hayes, Jason Aldean, Keith Urban, Lady Antebellum, Little Big Town, Luke Bryan and Taylor Swift. Acclaimed group The Mavericks will serve as the official house band of the evening. Voting is now closed for this year’s show, but the six finalists for VIDEO OF THE YEAR will be announced at the beginning of the live show and fans can then vote at CMT.com, CMT mobile, on the CMT Insider app and via text message throughout the live telecast (ET/CT only) to determine the night’s big winner.