Miami Heat Repeat As Back To Back NBA Champions! 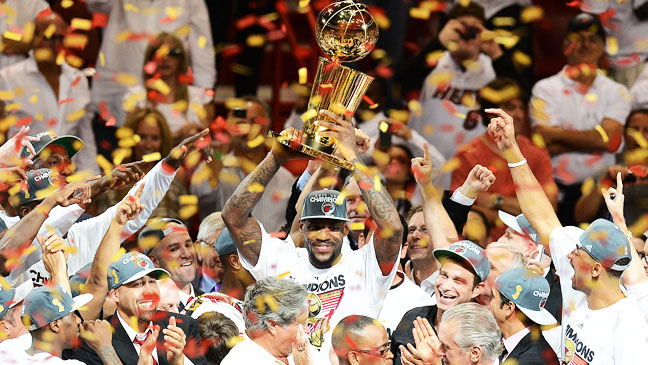 LeBron James and company prevailed in a seventh and deciding game, finally beating the San Antonio Spurs 95-88 to become the 2013 NBA champions. The Heat win their second consecutive NBA title at Miami’s American Airlines Arena. They are the first team to win back-to-back championships since the 2009-2010 Los Angeles Lakers.  On a night where Chris Bosh, the third leg of Miami’s stool, was practically invisible (0 points and five personal fouls in 28 minutes), reserve specialist Shawn Battier charged in to prop up the Heat with 18 points on 6 shots from behind the three-point arc, which all seemed to come at times that San Antonio was poised to make a scoring run. He strongly complemented James’ 37 points, including 5 three-pointers (as well as 12 rebounds), and Dwayne Wade’s 23 points and 10 boards. The Heat’s Mario Chalmers also hit double-figures with 14 points on 6-of-15 shooting. 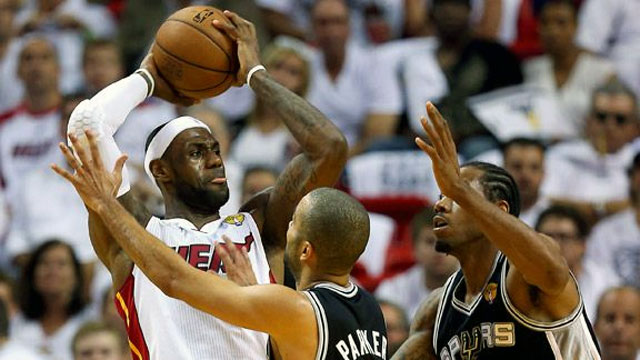 The Spurs got four players into double-digit scoring, led by Tim Duncan’s double-double of 24 points and 12 rebounds; Kawhi Leonard’s 19 points and mammoth 16 boards, and Manu Ginobili’s 18 points (including 2 threes). But this was offset by mediocre play from Tony Parker, who was only 3-of-12 from the field (10 points) and Danny Green, who notched a meager 5 points in 36 minutes, while going 1-of-6 from behind the arc and only 1-of-12 overall from the floor. And even with Ginobili’s point total, he still turned the ball over four times and committed four personal fouls. In total, San Antonio gave up 20 points off of their 15 collective turnovers. 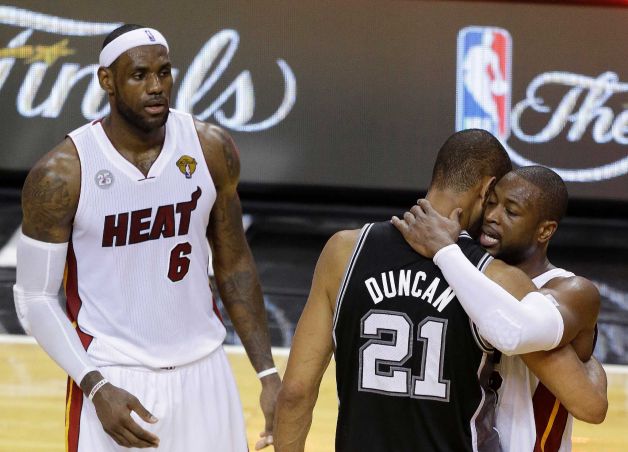 San Antonio’s head coach Gregg Popovich embodied the obvious respect these squads have for each other by hugging both James and Wade. Popovich said afterward that they both played “Hall of Fame” basketball during that last game, and that Battier’s shooting was “tough to match.”“Coach Pop” was also highly complementary of his own vanquished team: “I think they gave everything. They showed a lot of poise and mental toughness … I don’t think we played very well, but we gave it everything we had.” And when asked to explain their defeat, he added, “We just lost to a better team.”