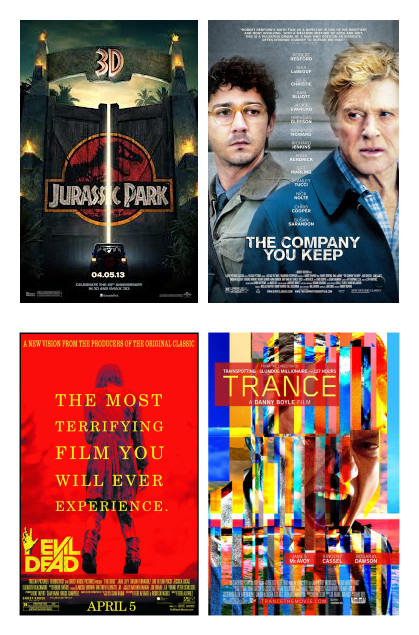 The Sam Raimi cult classic is given a hefty dose of modern day special effects and gore. For those who are unfamiliar with the oft reused and repurposed horror concept, Evil Dead follows a group of college-aged students as they embark on an epic weekend escape to a remote cabin in rural Tennessee. Bad things start happening to them after the group discovers a tome with the pretty self-explanatory title: The Book of the Dead. Anyone looking to see just how far cinema blood has advanced in the past thirty years should definitely check this flick out. http://www.evildead-movie.com

Steven Spielberg’s classic tale of dinosaurs, paleontologists, and dinosaurs eating paleontologists has been reissued in 3D and Imax. Even though the original was released 20 years ago, this anniversary rerelease truly shows how masterful and groundbreaking Jurassic Park was back in 1993 and even today. http://www.jurassicpark.com

The Company You Keep

Robert Redford headlines and directs The Company You Keep, a story centered on a former underground activist who goes on the run after a journalist finds out his true identity. Shia Labeouf co-stars in this indie pic distributed by Sony Pictures Classics.http://www.sonyclassics.com/thecompanyyoukeep/

In between directing a play at London’s National Theatre and helming the opening ceremony for London’s Summer Olympics, the filmmaker extraordinaire found enough time in his schedule to squeeze in the filming of Trance, a physiological thriller about an art dealer who steals and subsequently looses a really old, really famous piece of art. James McAvoy, Rosario Dawson, and Vincent Cassel star in this high-concept, intense tale from the Oscar winning director behind Slumdog Millionaire.  http://www.foxsearchlight.com/trance/