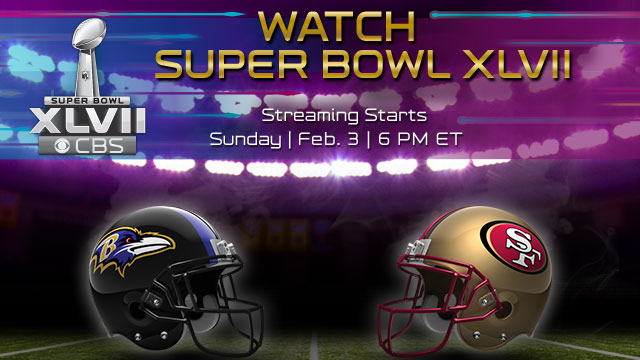 The Super Bowl is one of the most watched televised events in history. According to the NRF (National Retail Federation, 7.5 million households intend to buy/have purchased a new TV for the occassion. For those who didn't make the plunge for a new TV can live stream Super Bowl XLVII at www.cbssports.com. Streaming features include: a pop-up, browser-based video console optimized for laptops, desktops, and tablets featuring CBS Sports’ exclusive broadcast coverage of the game. CBS Sports’ lead announcer team, Jim Nantz and Phil Simms, call the action along with sideline reporters Steve Tasker and Solomon Wilcots.

The All-22 camera angle provides a high, full-field view from the 50-yard line showing all players on the field. Used in the broadcast as a telestrator feature to break down plays, the live All-22 angle is ideal for fans who want to study formations and get a coach’s perspective on each play.

The Fan Choice camera is a fixed position camera in the best position to hunt for compelling views of the game action. The view will change throughout the game based upon a producer’s choice or polls of the SUPER BOWL ON CBSSPORTS.COM audience on the most-wanted viewing angle, bringing a higher level of interactivity into the game experience.

The Sideline camera angle provides field-level views of the action from a camera mounted on a cart. The positioning moves with the plays to focus on the offensive action, making this angle especially useful for goal-line situations.

How will you watch the Super Bowl?

Sports
Super Bowl XLVII Predictions; Who Will Come Out On Top?