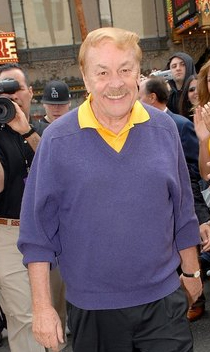 The Los Angeles Lakers owner, Dr. Jerry Buss has been in and out of the hospital for the past couple of years. According to the LA Times, the 79 year-old was hospitalized once again today; this time for an undisclosed form of cancer. The newspaper said he has spent time in the intensive care unit at Cedars-Sinai Medical Center, citing "multiple team personnel." He was in the hospital back in December of 2011 for blood clots in his leg. The Lakers said the clots were due to excessive travel.

Buss's children, Jim (who oversees basketball operations) and Jeanie (who oversees the business side of the franchise) have taken over the day-to-day operations for the Lakers. Buss did take part in the offseason acquisition of Steve Nash and Dwight Howard, and in the in-season coaching move that fired Mike Brown and hired Mike D'Antoni.

Sports
Tuberculosis Outbreak In LA: How Far Can It Spread?

Giving Back
The Humane Society Will Honor Animal Advocate Ke$ha