Is Life Out There? Maybe, Probably, We'll See... 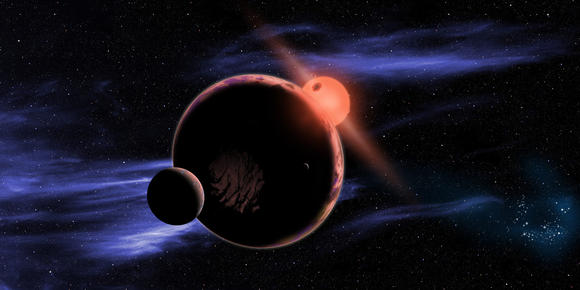 Earth might just have a twin not too terribly far away from us. Well, not too far in cosmic terms anyway. Scientists at the Harvard-Smithsonian Center for Astrophysics in Cambridge have discovered an “Earth-like” planet a mere 13 light-years away from our own blue sphere. While this 76 trillion mile distance seems almost incomprehensibly vast, Harvard astronomer Courtney Dressing assures us that in the grand scheme of the Universe, this is really just “a stroll in the park” (though it would still be an extremely expensive long distance phone call home for E.T.).

Scientists have dubbed this as a cousin of Earth for a few reasons. It is small, rocky and it resides in what astronomers like to call the “Goldilocks Zone.” This zone is defined by being not too close but not too far away from its host star (and thus ‘just right’). If a planet orbits in this area and it’s made up of similar rocky material then (and here’s where you start to catch the attention of non cosmic-zealots) it might just be able to support life.

So far it’s too soon to be able to tell whether or not there are any green people (or more likely germs and bacteria strains) milling about on this planet, but don’t let that stop your imagination. Since this planet doesn’t orbit a star in its stellar prime like our faithful sun, and it instead is circling a red dwarf (a sort of decrepit star in the middle of it’s death cycle), this leaves the possibility of life open to wildly different and, well, alien forms. Red dwarf stars emit dim light and would therefore yield strange (at least to us) kinds of life.

While astronomers have long since advocated for the idea that by the sheer force of numbers there has to be life on other planets (I mean, 1 to 1 billion odds aren’t that low if there are billions of billions of stars out there) it is still exciting to find one that fits the description, thus allowing scientists to point to it and say “See? Told you!”

At the moment, we still don’t really have any clue what kind of life exists out there, so for now we’ll just have to be satisfied with looking up in the sky, dreaming about it, and perhaps waving to our may-be neighbors.