50 Cent's comeback single "Be My Bitch": NO THANK YOU

The last thing I want to do is be your bitch, 50 Cent. The second to last thing I want to do is watch your new music video. Your voice may attempt to sound "smoother" but your lyrics aren't. And, 50, you've got to get your numbers right, man. If you have 2 bitches making out in your bed, that's 1 PLUS 1, which EQUALS 2. It's plural, "Be My BitchES."

For the 50 fans, his fifth studio album, Street King Immortal will be released on Shady/Aftermath/Interscope on November 13th. To be expected: more threesomes, bitches and a couple more hoes. Lots to look forward to. In other 50 news, the rapper has decided to become a boxing promoter... and check out his get-up! You'll definitely be gettin' some bitches with that look. Good luck to you! 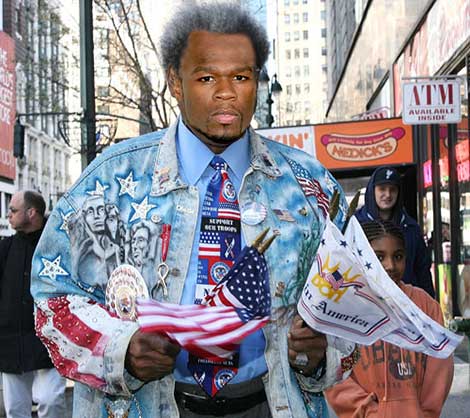 Music
New Single from Taylor Swift: "We Are Never Ever Getting Back Together"