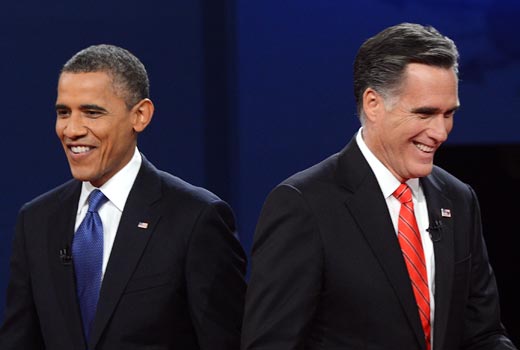 Mitt Romney gained a few voters last night, revealing himself as a true businessman. He was very much in control. It was clear that he had studied his opponent and was very comfortable at the podium. President Obama appeared tired and, at times frustrated. Did either one reveal anything that we hadn't heard before? Not really. Though, I believe many Republicans who were undecided are now swinging back to their party. There is no doubt that Governor Romney is a worthy contender for the presidency. As far as truly comprehending what they both were saying, I believe it is fair to say that it flew over most of our heads. Do we really know what 'regulation' means? Aren't the banks still foreclosing and not cooperating with the people? Can we relate to the five trillion dollar tax cut? One thing we know for sure, gas prices went up 10 cents more within 24 hours, healthcare is still unaffordable to most and the level of education is at its lowest point.

Of course, this morning most political analysts criticized both sides for not including everything in the 90 minute debate. Unlike most of the commentators, I do not see a huge difference between President Obama and Governor Romney.

At the end of the day, I did appreciate the fact that both were courteous, as this is one of the qualities we lack the most these days.

Breaking News
Are We Going To See A Real Debate? That's Debatable...

Breaking News
Are We Really The Change?