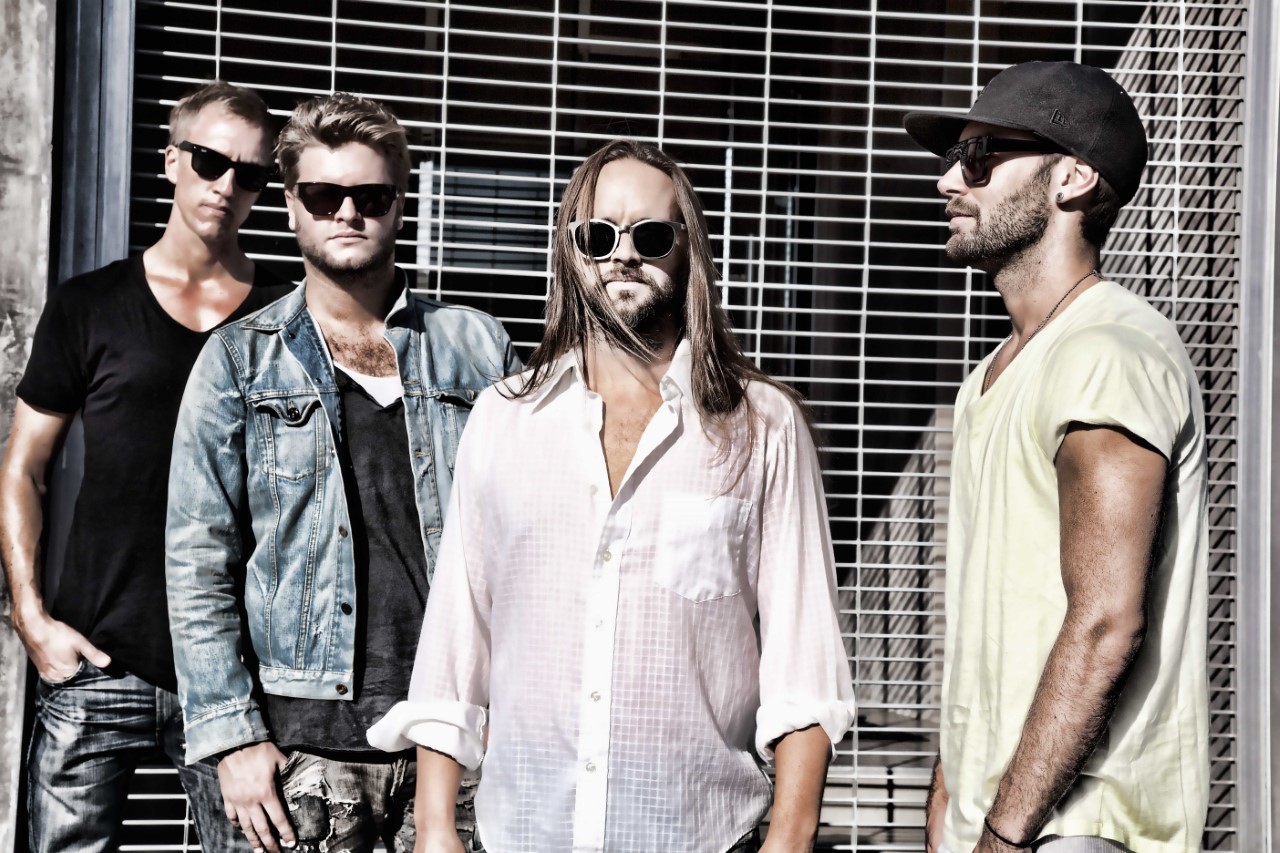 To be called a liar is usually not a compliment, but in the case of Carolina Liar, being considered a liar is not necessarily a bad thing. The events framing their ascent to fame are so improbable; it would lead one to believe that the stories would have to have been made up. Not so, as you will discover after LATF had words with Carolina Liar…

LATF: What does the Name “Carolina Liar” mean, and where did it come from?

Chad: It came from me growing up in South Carolina and these absolutely incredible stories that nobody would believe, just kinda follow us around. I mean, the idea of the band being one American and three Swedes, that alone is one of those stories, where, yeah, you’ve gotta be lying the way you guys met. Just like last Friday, we had an adventure when we walked down the street and some people invited us into their house, just randomly, somebody we met in an airport six months ago, it’s just those kinds of things happen every day no matter what we’re up to and that’s kind of where the liar comes from.

LATF: “Coming To Terms” was your first studio album, artistically did it meet your expectations?

Chad: Yeah, it really did, in so many ways for our first record, it took me ten years to get to that point finding everybody and putting these kind of songs together, so that was a big challenge to kind of learn that kind of refinement. Doug McKean was one of the engineers for the project here, when we were working and this other engineer in Sweden named Michael Ohlbert. Doug McKean had done the Green Day stuff and Michael Ohlbert had done all the Cardigan’s records and the Hives and all these kind of people. So bringing those kind of guys in kind of lent to these great instruments and sonic things that we could have never pulled off just using garage bands or something like that.

LATF: Chad you’re originally from Charleston, South Carolina, how did you end up with a band full of Swedish guys, and what part of Sweden are you guys from?

Johan: I’m from the west coast, Gothamberg, and then I moved out to Stockholm so we met in Stockholm (referring to Peter) and we studied together.

Rickard: We’re from the south of Sweden… (motioning to Peter) 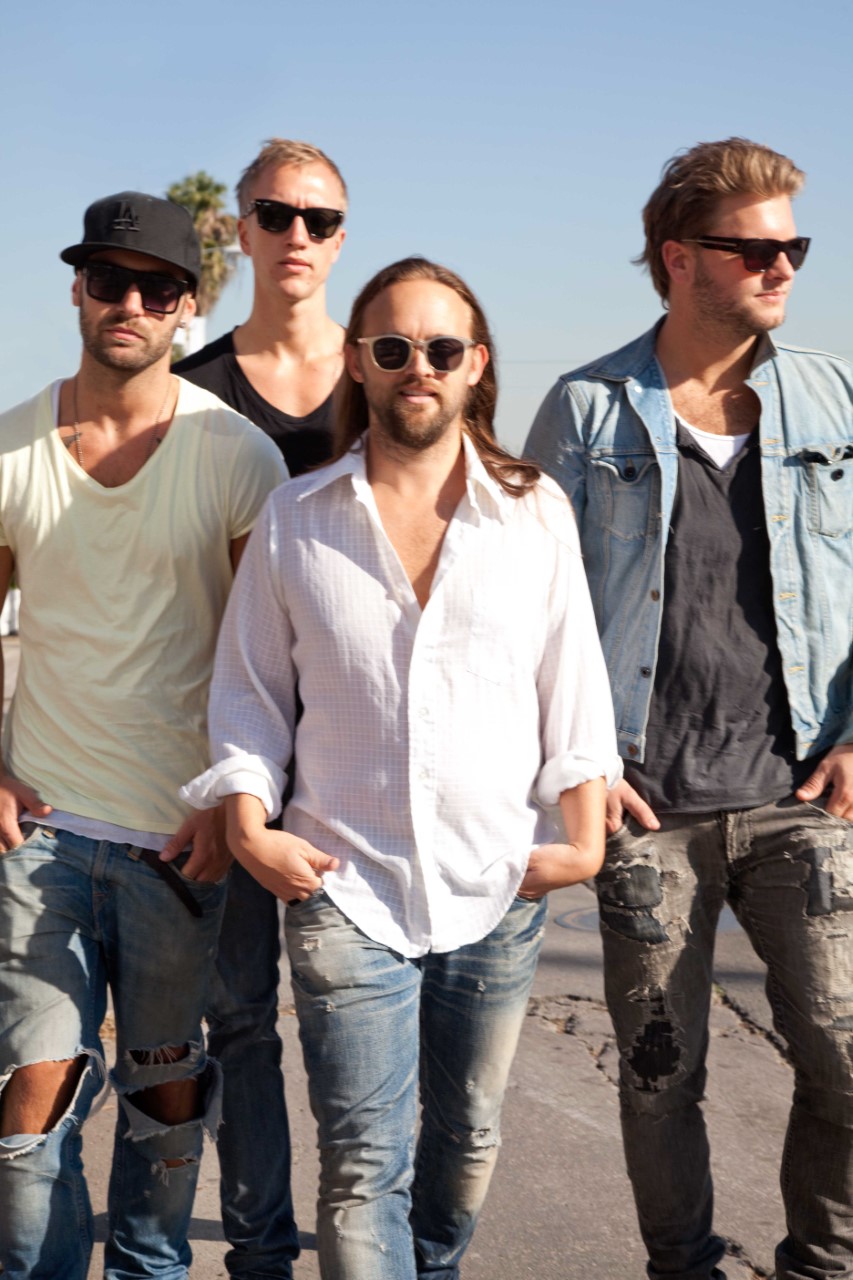 LATF: Ok, that’s easy to say!
(Laughter)
Rickard: It’s basically all the letters you don’t have… in one word! (More laughter) So, we went to high school together and we moved to Stockholm together.

Johan: And Chad moved to Stockholm, so we met in Stockholm.

LATF: So, you actually moved to Stockholm?

Chad: I had to move there. Max Martin was the producer; he’s the producer for the second record, too, ultimately, and he basically said, ‘Look, if we’re gonna finish this record off you need to move to Sweden to make sure everything’s set up the right way.’ And when we got there we started working on the demos, that’s before a lot of the stuff was even really recorded, and that’s where I found Johan, because we had these, kind of crazy parts that we had started off with just a lot of old synthesizers and
we’d combined a lot of the stuff and kind of made one sound out of some of the studio recordings. And we put it all on one keyboard and right now we had to figure out who can actually play this stuff like, where does it come from, and that was before Johan came on and became a writer in the band and actually played on it. So that’s kind of how we found him, through one of your friends (motioning to Johan) a producer friend of his who was like;, ‘We know this kid who is a monster player, you’ve gotta check him out.’

LATF: How did you land the internship with Diane Warren?

Chad: That was a crazy one… I was going to M.I. (Musician’s Institute) and while I was going to school, once I got there, I noticed that I was just going to study guitar but, everybody was such a better guitar player than what I was, and it was like, I better figure something out, because I’m definitely not gonna make it as a session player out here, that will never happen. And I talked to this business teacher, this woman named Ruda Cerpetes, who was representing Steve Vai, and I think she was doing Joe Jackson at the time, two strangely different artists, but really cool people and I just went to her one day and said; ‘Whatever you did that got you where you are right now, I’ll do it with no questions asked, just tell me where to show up, if there’s an internship, anywhere, I really want to learn how to write songs or anything, I just need to get into the business and I promise I won’t make you look bad, whatever it is, I’ll do it.’ She called me on like a Tuesday and said have you ever heard of Diane Warren? And at that time, I was a real snob when it came to what I was listening to music-wise, and of course I had heard her songs, but I really didn’t know who she was as a writer. And then I went down to the interview and they gave me the job on the spot.

LATF: How close did you work with Diane?

Chad: Pretty close, I mean, we still talk every now and then. Just up until last year she had a song that she actually had me come back down and I
sang on one of her demos, and she really wanted to do it for the record, but it wasn’t necessarily the right fit.

LATF: Man, talk about fate, what are the chances of you house-sitting for a friend of one of the hottest producers in the business?

Chad: It doesn’t happen. That’s another one of those stories man, that’s exactly what happened. I had a bad girlfriend at the time, a relationship thing that was just going sour and this friend knew the situation and was like, ‘Man come over stay in my house, I know you don’t have enough money to get another place,’ ‘cause my credit was screwed and there was no way of getting anything, I was even gonna live out of my car for awhile, or something like that, and he was like, ‘I’ve got a bed just come over and we’ll keep writing.’ ‘Cause I was going over to his house and writing anyway once or twice a week so he said, just move in and pay what you can. And that was the agreement, and now Alex has got possibly one of the first or second singles on this record.

LATF: Were you aware at the time that he knew Max Martin?

Chad: I knew he knew him, but I wasn’t sure like; it’s one of those things when you’re in L.A., everybody always says they know somebody or something like that and it was just one of those things at first where he was like, yeah; it’s kind of like one of my high school friends. And you take it face value, but still until you see something in this town, you just wait to see, and sure enough they had some crazy adventures together.

LATF: What was the name of the song of yours that impressed Max Martin enough to call you and ask for more songs?

Chad: That was, “Coming To Terms,” and the way that song came around was, he had paid for a trip to Sweden for me ‘cause I had never left the United States and we were just hanging out drinking one night and everybody was saying you need to come and see Sweden during the
summer, you got to see this place it’s amazing. And he was just like, ‘Man, why aren’t you coming out, what’s the problem?’ I was like; ‘I’m poor, I really, I don’t have it man.’ And he’s like, ‘Well I’ll buy you a ticket.’ And he did. The next day he gave me his number for a travel agent and the woman was like, ‘Come this week, ‘cause that’s when they’re expecting you.’ And sure enough, he really stood behind his word.

LATF: Did you always want to be a songwriter or did you start off just wanting to be a musician in a band?

Chad: You know, I think I’d always wanted to be a songwriter that was the ultimate thing, especially being a little bit more past that 20 year mark, I thought just really focus in on becoming more of a songwriter and when this started taking off, it was like, no you’re going to do this, this is really your thing, it’s kind of your own vision, bringing this kind of American folk song with this kind of Swedish Pop influence this will be something that kind of is there to a touch, but not really, there’s something new there that we can explore and get into a sound that kind of hasn’t existed.

LATF: The lyrics to “Show Me What I’m Looking For” are kind of religious, inspirational, if I can say, with the chorus; “Save me, I'm lost Oh lord, I've been waiting for you.” Do you consider your music religious in any way or just Alternative?

Chad: That song is so funny, ‘cause none of us are religious in any way, maybe spiritually, but as far as religion goes, none of us really claim any faith. But, that particular song was one of those things where I was just thinking about everything, and everybody, especially in L.A. you’ve got a choice of this or that, and I did all of it, I tried all the drugs, I tried everything that was there, and still like, ok, which ever lord you want to call it, what exactly is it that I’m out here looking for, I’ve tried it all, what was the real answer behind all this stuff. None of us really know what it really boils down to. And the funny thing was, that song when it turned into a bit of a religious thing for some people, and it just kind of goes to show like, once you put it out there, it’s really not yours and it kind of never is to begin with. You’re just kind of a small instrument that gets this stuff sent through you, we can’t really claim it as our own song at this point.

Read the full interview at http://www.latfthemagazine.com/magazine/008/carolinaliar.html